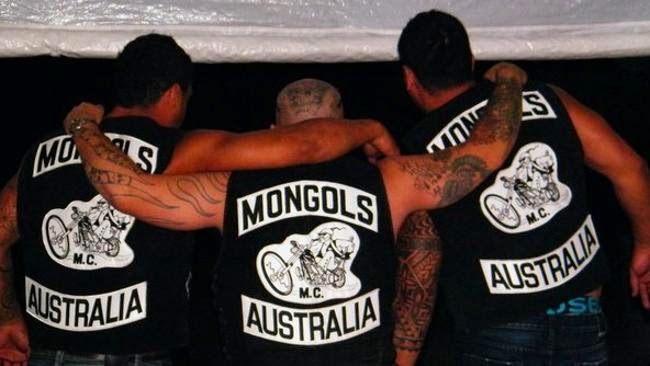 ONE of America's most feared bikie gangs is eyeing off territory on the Gold Coast. The Gold Coast Bulletin captured exclusive images of patched members of the Mongols in Southport and the club is rumoured to be planning an audacious move to push into the lucrative Glitter Strip. Police fear another club muscling into the city limits could finally tip an already tense environment, with 10 clubs now vying for a slice of the party strip. Zero-tolerance or bikies will own the Coast Of the 10, seven have fortified clubhouses protected by elaborate security. The number of outlaw motorcycle gang members on the Gold Coast has skyrocketed, with up to a third of Queensland bikies now having a Gold Coast address. Queensland police union president Ian Leavers condemned the Mongol push, saying they "simply cause an increase in crime and scare away tourists". "As a community we need to tell these bikie thugs they are not welcome on the Gold Coast," Mr Leavers said. Tensions between clubs are high, with the brawl between the Finks and Nomads at last week's Cooly Rocks On festival the latest in a long run of violence. The two clubs insist there is no issue between the gangs, only "personal rivalries". A series of recent tattoo parlour fire bombings and an alleged drug-fuelled rampage have added to the outlaw friction. Senior police sources say the Mongols, sworn international enemies of the Hells Angels, have established a temporary base at Carrara, the heart of Rebels territory. The Rebels claim to be Australia's largest and strongest outlaw motorcycle gang and will not welcome any attempt to push into their turf, police said. Their clubhouse is based in Lawrence Drive, Nerang, close to Mongol-owned business interests. "The Mongols are a serious bike club," police said. "Look at their history. This club means business." Outlaw sources estimate the Mongols have about 70 patched members in Australia, with the NSW Central Coast being the club's stronghold. The Mongols MC website claims the club has several chapters in NSW, Melbourne, Adelaide and Perth. Their push into the Coast coincides with moves to have the Finks declared a criminal organisation. It will be heard in the Supreme Court in October. The Gold Coast Bulletin forwarded the images to police bikie squad Taskforce Hydra, which refused to go into the Mongols' public presence for "operational reasons". The Mongol push into the Gold Coast follows the Hells Angels' move into Burleigh after years of aborted attempts. The Angels' low-key base in Lemana Lane, Burleigh, and other business interests were firebombed, but they have otherwise gone unchallenged. Neighbours said gang members were quiet and kept to themselves. It is believed previous efforts by the club to break into Australia had failed. "They have tried to push into a number of cities without much luck," outlaw sources said. "They seem to get a few members and then they go nowhere. They aren't much of a force in Australia, especially when you consider the size of the clubs in Australia." However, police fear the bitter enmity between the Mongols and Hells Angels could increase friction. "The Mongols are sworn enemies of the Hells Angels. In the US the club has a shoot-on-sight policy for any Hells Angels," police said. Violence between the two international clubs erupted at a casino in Nevada in 2002 in circumstances eerily similar to the Ballroom Blitz fracas on the Gold Coast in 2006 between the Hells Angels and Finks. The confrontation in Laughlin, Nevada, left three bikers dead and prompted a massive crackdown in the US. Mongols claim on their website they have received "massive support" in Australia. "We as a club have gone back to the true basic values of what a motorcycle club is and should be and that reflects on our brotherhood that we have with our support, love and respect for one another and for our passion of motorcycles is unheard of," the website states. "Mongols MC Australia would like to thank you for visiting our website and for your support and welcome you to the Mongol nation."
at 20:03 No comments: Links to this post

Email ThisBlogThis!Share to TwitterShare to FacebookShare to Pinterest
Labels: Mongol hordes descend on the Gold Coast

A GOLD Coast ex-top cop turned criminologist has slammed what he says is a lack of tough action against outlaw motorcycle gangs. Terry Goldsworthy, a former detective inspector in charge of Burleigh Heads CIB who is now associate professor in criminology at Bond University, said bikies needed to be shown "they don't run this town". His comments follow more bikie violence on the Glitter Strip, including last weekend's brawl at Coolangatta which left a 61-year-old bystander in hospital and Tuesday's wild rampage through Southport in which a taxi was shot up, a milk truck hijacked and crashed and a bus driver assaulted. Trainee bikie bailed over brawl Bikie declared 'too violent' for court Dr Goldsworthy, who finished his 28-year police career last year with the Ethical Standards Command, said senior police had their "heads in the sand" and were not going after bikies as hard as they should. He said they should have zero tolerance of gang members and be actively targeting them, but were instead reactive. "Public perception is a key indicator for any police service and the perception is growing within the Gold Coast community that these bikies aren't being dealt with,'' he said "The bikies need to be shown they don't run this town and they are subject to the laws of Queensland.'' South Eastern police region Assistant Commissioner Graham Rynders this week trumpeted bikie arrest figures, saying more than 400 had been nabbed on almost 1100 charges including murder, serious assault and weapons possession since January last year. "The persistence and determination of police, to ensure OMCG members and associates are held accountable for their actions, is relentless,'' he said. But Dr Goldsworthy said police could be doing much more, including targeting bikie clubhouses that had not been raided in several years. He said Coast police had the manpower and resources to tackle the gangs but there was "a lack of leadership". "You could together put a taskforce of 20 officers in an hour dedicated solely to crack down on the [outlaw motorcycle gangs],'' he said. "You could have [random breath and drug testing] and liquor licensing operations targeting their clubhouses of a weekend. "It's all about leadership and the use of resources. The poor constables out on the road need someone to tell them 'We want you to target the bikies and this is how we're going to do it'.'' Dr Goldsworthy questioned whether Leonard Toalei, the Bandidos bikie accused of Tuesday's Southport rampage, was under surveillance after being released on parole in January. "You have to question if the local CIBs are liaising with probation and parole officers to identify high-risk releasees,'' he said. Dr Goldsworthy also said Mr Rynders was "playing semantics" with his assertion that the latest bikie violence was carried out by gang associates acting as individuals. "Bikie gangs are very hierarchical and while the senior members might not be telling associates and nominees to go out and play up, they're tacitly condoning the behaviour,'' he said. "They (senior members) certainly are not going to be ringing up and saying 'top that naughty behaviour'. The guys that are out there carrying out the violence are doing so under their gang brand.''

Disclaimer: The statements and articles listed here, and any opinions, are those of the writers alone, and neither are opinions of nor reflect the views of this Blog. Aggregated content created by others is the sole responsibility of the writers and its accuracy and completeness are not endorsed or guaranteed. This goes for all those links, too: Blogs have no control over the information you access via such links, does not endorse that information, cannot guarantee the accuracy of the information provided or any analysis based thereon, and shall not be responsible for it or for the consequences of your use of that information.

Pageviews from the past week

BIKIE GET PATCHED IN